A quick review of the key concepts behind the Pathway programming framework.

Pathway programming framework has its own terminology and concepts, and it is primordial to understand those well in order to be able to use Pathway to the full extent of its capacities. In the following, we are going to do a quick review of the following terms: Table, index, pointer, id, universe, connector, transformer, and computation graph.

Here is a quick summary of the relationship between those:

The Pathway programming framework is organized around work with data tables - a table is simply called Table.

Pathway's Table is similar to a classical relational table as it is organized into columns and rows. Each row is identified by a unique id which is the equivalent of an SQL primary key or of an index in pandas. Each column is a collection of pairs composed by an id and a value.

❌ id is a reserved column name, don't use it to create a new column.

Pathway's Table comes with a number of available methods to work on tables such as select or join: to call such a method f on a table t, we use the dot notation t.f(). Similarly, to access a given column, you can use the notation t.col_name: in particular, t.id returns the ids. You can see our survival guide and the full API documentation.

The ids of the rows, also called indexes, are automatically generated by Pathway's engine unless explicitly provided with the function .with_id(). Reindexing is costly, so it is better to let Pathway handle the indexes, unless some specific indexes are needed. Furthermore, the type of the id column is imposed: an id is a not a number or a string but a pointer (pw.Pointer) which points to the corresponding row.

Simple, but there is a bit more to this than meets the eye! Pathway aims at working on ever-changing data tables: Pathway's engine ensures that each update in the data is taken into account in real time on each table. In this context, the set of ids is not something static nor stable: universes are used to be sure operations are performed on compatible data tables, despite the instability.

Pathway tries to infer whether the tables have the same universe but depending on how the tables are processed it may fail. You may want to force two tables to have the same universe (or one table have a universe which is a subset of the universe of the second): Pathway might have failed the inference or because you know that the two tables actually derive from the same data source: you can specify it manually with t1.unsafe_promise_universe_is_subset_of(t2).

Transformers may be combined into other transformers, as Python functions.

How are these operations meant to work in realtime with streaming data? Pathway's Transformer syntax serves to schedule operations. These operations will be later executed by the runtime engine to process actual data.

While the outcome of operations can depend on data being processed, the operations as such need to be defined in a data-independent way.

Supported methods are given in our API docs.

Transformer classes are used for easy implementation of data-structure querying operations, defining APIs in Data Products, and on-demand computations. Take a look at the transformer class tutorial to find out more.

Pathway's transformer syntax allows you to express pipelines of transformations on entire (and ever-changing) data tables. In Pathway, transformers behave like functions, whose arguments are Pathway Table.

If you have used Spark SQL or Kafka Streams in the past, the syntax should feel familiar.

Transformer and transformer classes are used to design a processing pipeline for the data. In Pathway, the processing pipeline is modeled using a graph. This graph, called the computation graph, models the different transformation steps performed on the data. Each node is either a table, an operation performed on one or more tables (e.g. a transformer), or a connector. As an example, let's consider this graph:

In this example graph, two data sources are read using connectors, building two tables T1 and T2. Those tables are modified using two operations t1 and t2, resulting in two new tables T1' and T2'. The operations t1 and t2 can be any operations manipulating a single table, a select with a apply for instance. Both tables are then combined by an operation requiring two tables, such as a join, resulting in a table T3. Finally, output connectors are used to output both T2' and T3.

Pathway comes with connectors which connect to streaming data sources at input, as well as connectors which send notifications of changes to Pathway outputs. When the computation is run, input connectors listen to input sources for incoming updates (see our article on connectors for more information on this). Similarly, output connectors are writing the output data whenever updates are received. See how to set up your first realtime app and some of our tutorials for an illustration of connector use. 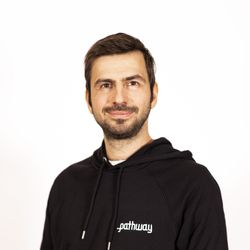 Your first realtime app with Pathway